One step in our continuous efforts to increase road safety is three new trucks, which have been delivered without physical side-view mirrors.

After his first test in a truck without mirrors attached to the side of the driver’s cabin, our Fleet Manager Palle Albertsen had no doubts whatsoever.

”I was driving on mountain roads and in towns in Spain, and quickly realised that our drivers would benefit tremendously from this new technology”, he says.

The traditional side-view mirrors are replaced by cameras above the doors of the new tractors. The cameras record along the sides of the truck, and the live images are broadcast on two large screens placed upright next to the A pillar on either side of the cabin.

Firstly, when the truck turns the camera follows, ensuring that the driver always has the rear end of the trailer in the centre of the picture. With a traditional mirror, the driver sees only the middle of the trailer when the truck turns. This improved visibility significantly reduces the dreaded right-hand turn accidents which are among the most common accidents involving trucks.

Secondly, the camera switches to wide angle when reversing. Combined with adjustable guidelines on the screens, manoeuvrability is greatly assisted for the driver.

Thirdly, without mirrors on either side of the cabin, a large part of the blind angle is removed. The driver has a much better view when entering or exiting crossroads, pedestrian crossings, and roundabouts, reducing the risk of transverse traffic collisions. 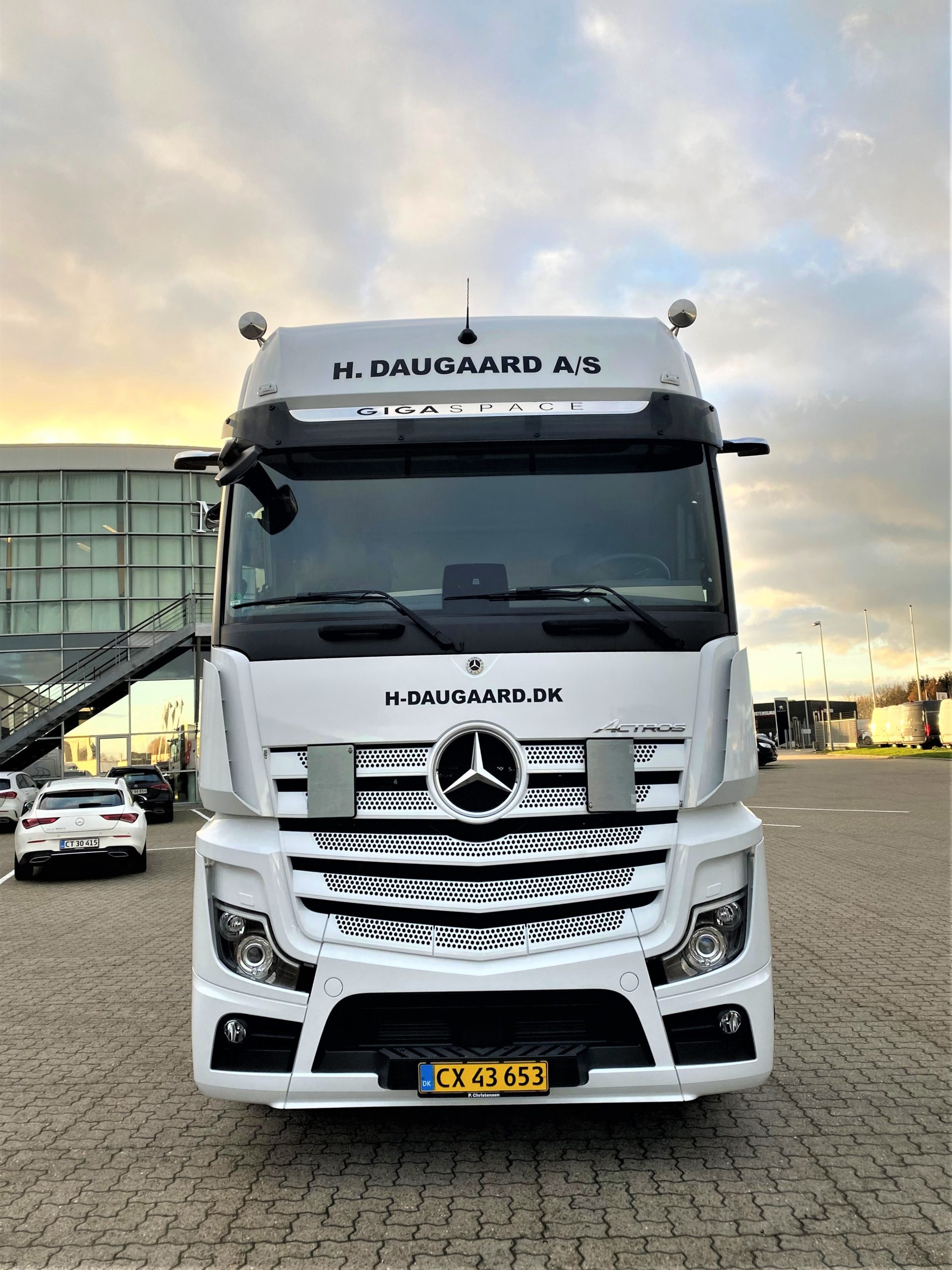 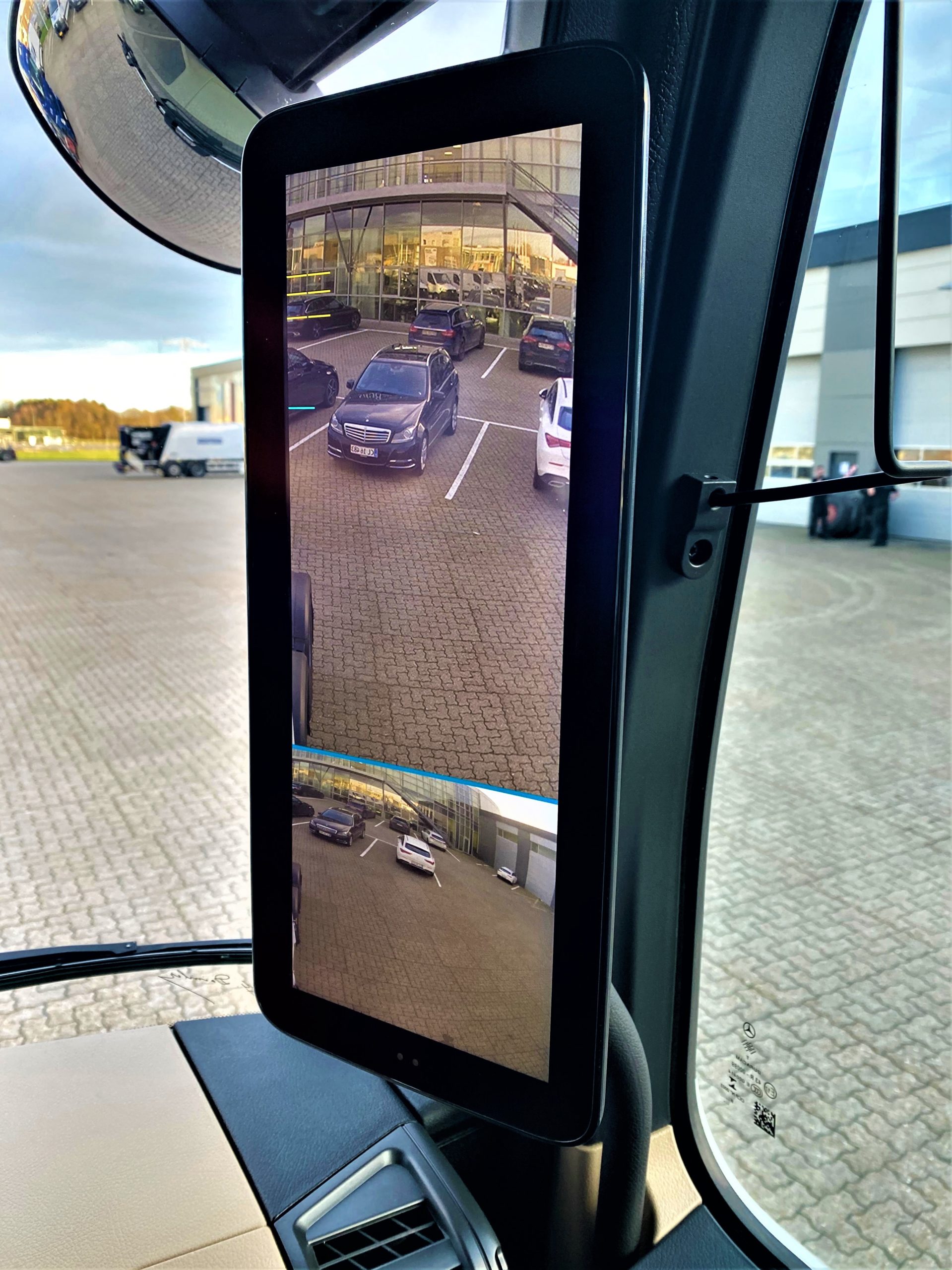 Worth the extra price

The actual technology behind the digital side-view mirrors has existed for some time. The possibility of type-approving trucks containing the technology has come later. With the official approvals in place, we were in no doubt that this feature was an important addition to the list of options, when – in the new year – we took delivery of three new trucks as a part of our continuous fleet renewal.

”This type of equipment does not come cheaply, but to a company as ours, it is a natural step to take”, Palle Albertsen says.

He refers to the ongoing efforts of H.Daugaard to make the roads a safer place to be. This includes faithful participation in the annual truck caravan, during which students have the option to sit in the driver’s cabin and see for themselves just how difficult it is to spot a cyclist on the right side of the driver’s cabin.

Another key action area is load securing, which is relatively vaguely addressed in the Danish Road Traffic Act.

”We may use an extra half hour to safely secure the cargo before taking to the roads, and it may cost us slightly – but this is an acceptable cost to us and absolutely preferably to risking otherwise avoidable accidents”.

Will be added to more trucks

Even though the average age of our entire fleet has been brought down to less than 2.5 years, and all the trucks adhere to the Euro 6 norm, the fleet will be continuously renewed. Later this year, we will be replacing part of the fleet in our Czech subsidiary Dauczech, which handles international transports for H. Daugaard.

Digital side-view mirrors are part of current supplier negotiations as are active right-hand turn assistance, which uses a radar to register soft road users and brings the truck to a full stop in the event of collision risk.

”Unfortunately, active right-hand turn assistance is not yet available for the 3 axle tractors we require in Denmark. I do hope, however, that this feature will be available soon”, says Palle Albertsen.

25/08/2022
Transportation within the construction industry